The Art Gallery of York University (AGYU) and York University present Streams~ Nuit Blanche 2022 at York University, an evening of campuswide exhibitions, art installations, and events featuring 34 artists and showcasing 18 projects located around the central core of York’s Keele Campus and surrounding the Harry Arthur Commons. Each artwork and program is conceived as a distinctive whole, but the title Streams~ identifies their shared commonalities in theme, process, and research methodology.

As part of the broader Streams~ event, and in collaboration with the Archives of Ontario and the AGYU, Archive/Counter-Archive is organizing six media art installations across the Keele campus. Five of these will be united under the exhibition title, Biophilia: Artist and Archive, with the sixth being tied to the launch of CineMobilia, a new mobile infrastructure dedicated to digitizing archival moving image material.  See below for Janine Marchessault’s curatorial statement and details on each of the individual projects. If you have any questions, please reach out to our Knowledge Mobilization Officer, Andrew Bailey, at kmo@counterarchive.ca.

Curatorial Statement
Biophilia: Artist and Archive references a love of living things. At the heart of the exhibition are more than human animals and our entanglements with them. The five artworks commissioned for Biophilia: Artist and Archive offer an extended conversation with the Archives of Ontario's exhibit Animalia which engages with a history of animals in the archives documented through photographs and films. Biophilia seeks to reimagine archival interfaces -- interactive screens (Public Visualization Studio), CRT sculptures (Logue), architectural projections (Dysart), water and AR (Norton), and a planetarium (Chong). The artists reflect upon the place of animals in Indigenous cultures, their hidden histories beneath the earth, the AI fabulation of bestiaries, and ancient knowledge systems transformed by climate change.

Sponsors:
Biophilia: Artist and Archive is funded through the City of Toronto, Nuit Blanche, Archive/Counter-Archive’s Partnership Grant, the Canadian Film Institute, and the Social Science and Humanities Research Council.

Project Description: Fabulous Ones presents creatures inspired by Jorge Luis Borges’ writing conjured by Public Visualization Studio and collaborators. Three-dimensional digital masks of these creatures look back at viewers, interacting with them through motion-sensing cameras and AI-generated animations. Through processes of social and technical translation, this project aims to combine, dramatize, and question concepts of description, classification, imagination, speculation, and diaspora.

Programmed by Archive/Counter-Archive with Nuit Blanche; curated by Janine Marchessault & Dr. Julia Nagam. Fabulous Ones is featured as a part of Streams~ Nuit Blanche 2022, which is being organized by the Art Gallery of York University.

The People Behind the Work: Public Visualization Lab focuses on how visualization can operate as a critical design and media practice. A priority for the lab is to understand the ways that the representation of data is political as well as analytical, designerly and creative. A basic premise that guides our projects is that visualization is an assemblage that arranges people, things and processes and, as such, demands a commitment to ethics, accountability and meaningful participation.

Project Description: Tributaries uses multimedia projection and augmented reality content of native and invasive species to mark and draw attention to the freshwater habitats of the York University campus area. These tributaries were buried or rechanneled as a result of urban development. The animated projection and superimposed AR component show the biodiversity of the surrounding area to create an ethereal intermingling of native and invasive species.

Programmed by Archive/Counter-Archive with Nuit Blanche; curated by Janine Marchessault & Dr. Julia Nagam. Tributaries is featured as a part of Streams~ Nuit Blanche 2022, which is being organized by the Art Gallery of York University.

Project Description: Chris Chong Chan Fui is known for his experimental film-based artworks, which take into question the objectivity of fact and the possibility of defining reality. Nocturnal Zodiac re-configures traditional Eastern and Western astrologies into a new cyclical archive of modern human characteristics and future-telling that drive our fate on this planet. A star map will be projected and mapped onto the entire rotunda of Vari Hall.

Project Description: A multi-screen projection installation on the window surfaces of Archives of Ontario, Revisiting Keewatin is a film found at Library and Archives Canada by Jennifer Dysart. The film documents the Keewatin Missions in Northern Manitoba showing Catholic Missionary Activity with the Cree community in the 1950s. Focused specifically on the animals visible in this archival footage, the work sifts through the Indigenous relationships with animals.

Programmed by Archive/Counter-Archive with Nuit Blanche; curated by Janine Marchessault. Revisiting Keewatin is featured as a part of Streams~ Nuit Blanche 2022, which is being organized by the Art Gallery of York University.

Artist Bio: Jennifer Dysart is a director of short films, a set decorator (Nabet 700-M Unifor permittee status coming soon), an assistant director, a field producer, an archival researcher, legal clearance coordinator, production coordinator, and occasional arts jury member. She is the recipient of the York University master’s thesis prize in 2014 for her documentary film Kewekapawetan: Return After the Flood.

The Opposite of Ignoring Chickens - Deirdre Logue

Project Title: The Opposite of Ignoring Chickens
Artists: Deirdre Logue
Location: The Archives of Ontario (Lobby)

Project Description: The Opposite of Ignoring Chickens documents the artist tending to and interacting with her 7 chickens. The fascinating symmetry between the artist and her chickens reveals a relational codependence that collapses the sensual and the intuitive, wildness and domestication. The project’s sculptural and installation components incorporate multiple 4:3 ratio, CRT monitors dating back to the 1980s, and the sounds of the birds and the artist in ‘dialogue,’ remixed to create a polyphonic soundtrack.

Programmed by Archive/Counter-Archive with Nuit Blanche; curated by Janine Marchessault. The Opposite of Ignoring Chickens is featured as a part of Streams~ Nuit Blanche 2022, which is being organized by the Art Gallery of York University.

Artist Bio: For the past 20 years, the film and video work of Canadian artist Deirdre Logue has focused on the self as subject. Using 'performance for the camera' as a primary mode of production, her compelling self-portraits investigate what it means to be a queer body in the age of anxiety.

Logue has been prolific and steadfast in her engagement with the moving image and has subsequently produced upwards of 60 short films and videos as well as some of this country's most celebrated video art installations including Why Always Instead of Just Sometimes (2003-2007), twelve works that are reflections on aging, breaking down and reparation; Id's Its (2012), an ambitious suite of thirteen installations exploring the richness of our malfunctions and Euphoria's Hiccups (2013) an intentionally intense, site specific work incorporating upwards of 20 small video screens, still imagery, sound and psychoactive plants; crosspollinating Logue's tendencies towards obsession and addiction with contemporary thinking on healing, landscape and mindfulness. 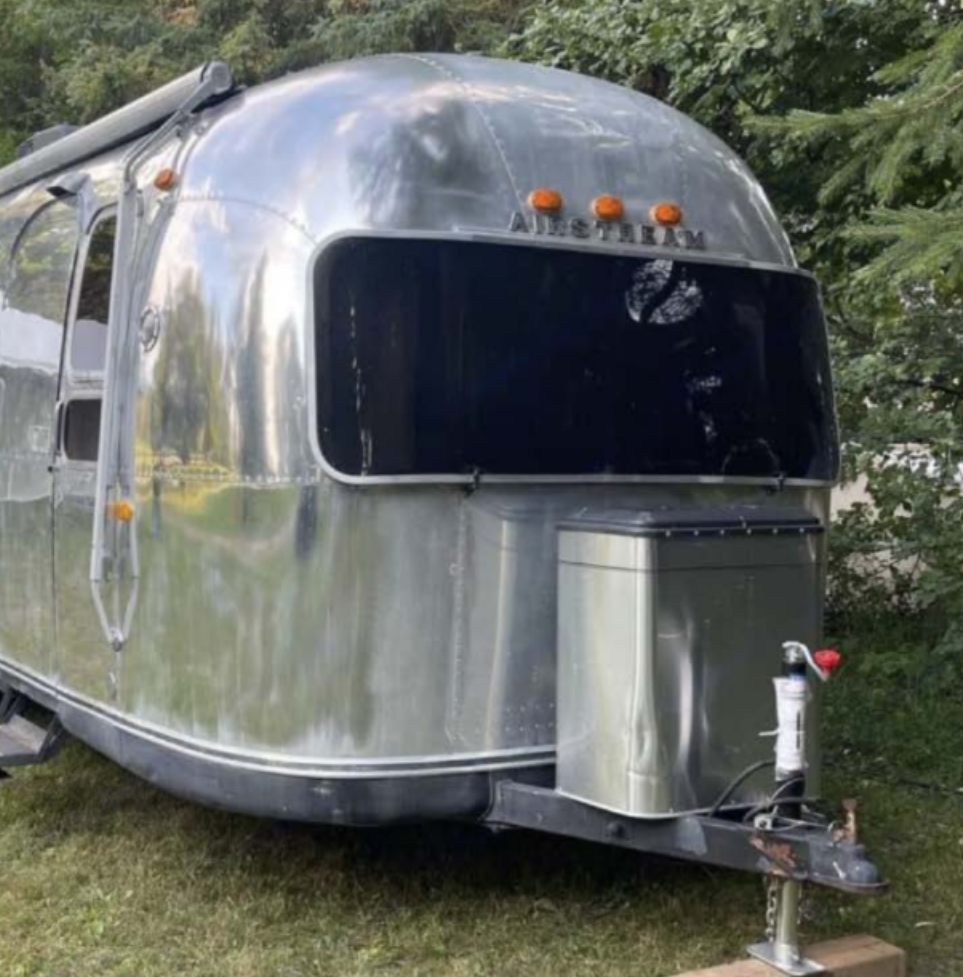 Project Description: CineMobilia is a new mobile infrastructure that is being launched at Nuit Blanche (project members include Janine Marchessault, John Greyson, Patricio Davila and Director of Operations Jean-Pierre Marchant) that is part of Archive/Counter-Archive. The CineMobilia project is a flexible, responsive infrastructure tailored to the unique archival needs of Canadian marginalized communities, specifically collections with limited staff, those with difficulty making their collections represented and discoverable, and/or collections that represent an underserved/underrepresented community (Indigenous and Black communities, women, the LGTB2Q+ community, and immigrant communities). The hope is to attract members of the York and surrounding communities to bring their analogue or born digital archives to be preserved. The 1970s trailer will be decorated with many small screens as well as film projectors.

The People Behind the Work: Taking its name from the multitude of historical media literacy projects that sought to bring film and media to underserved communities - “cines móviles” of Cuba, cinema trains in Russia, and “Cinema Mobile” projects by the Canadian Film Board, CineMobilia is a mobile infrastructure lab tailored to the unique archival and presentation needs of marginalized communities in Canada.